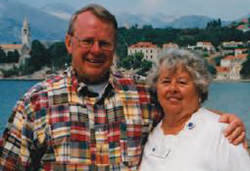 At the center of Covenant Seminary's community life for the last five decades has been a former private estate house which has served a variety of functions over the years and which has been brought to its present form through a variety of additions and expansions. From housing the main offices and classroom space of the institution in its early years to providing hospitality for prospective students and other visitors to serving as a lounge, event space, and focal point for the informal interactions of students, faculty, staff, and their families, Edwards Hall, as the white brick structure is now known, has long been the heart and soul of the Seminary campus. Though new students sometimes assume that the building is named for Jonathan Edwards, the famed eighteenth-century New England preacher and theologian—and given the Seminary's heritage that's not an unreasonable assumption—such is not, in reality, the case. Rather, the name pays tribute to a prominent St. Louis family whose association with and support for the Seminary goes back to the very beginning. In fact, without the friendship and generosity of the Edwards family, Covenant Seminary would not be where it is today—quite literally.

In 1956, the founders of the newly established Covenant College and Theological Seminary decided to move the school from Pasadena, California, to Creve Coeur in St. Louis County, Missouri. Though now a busy, sprawling suburb of St. Louis, at that time the area was considered very much "out in the country." Comprising 21 acres of hilly, wooded land, with a solidly built house, a log cabin, and a few small buildings and sheds, the new campus was originally a private estate that had for some years served as a Roman Catholic retreat center. The location seemed perfect for the new school, but initially beyond the financial reach of its trustees and small parent denomination, the Bible Presbyte-rian church—until funds from a charitable trust managed by Albert N. Edwards, a partner in the St. Louis brokerage firm of A. G. Edwards and Sons, made the purchase possible. In addition, Mr. Edwards's nephew, Presley W. Edwards, then the managing partner of the family's firm, was one of the primary financial supporters of the institution in its early years and a faithful trustee of the school from its inception until 1971. To honor this generosity of service and support, the main building on campus was fittingly named Edwards Hall.

But the family's involvement with and support for the Seminary didn't end there. As Covenant College and Seminary grew into two separate entities (the college moved to Lookout Mountain, Georgia, in 1964) and the Bible Presbyterian Church eventually became part of what is now the PCA, succeeding generations of Edwardses took up the mantle. Benjamin F. ("Ben") Edwards III, son of Presley and CEO of A. G. Edwards and Sons from 1966 until his retirement in 2001, served multiple terms on the Seminary's Advisory Board, bringing his great business sense and heart for the gospel to bear through his work on the Investments and Development Committee. Among his many achievements in this role, Ben Edwards led the Jewel of Grace, Fire for Ministry capital campaign in the late 1990s, which raised more than $14 million to fund the expansion and renovation of the Seminary's J. Oliver Buswell Jr. Library as well as provided for five faculty chairs and additional scholarships for students and their spouses.

But Ben wasn't known only for his business acumen. His integrity in business and personal relationships, his honest concern for the welfare of those who worked for him, and his deep desire to glorify the Lord in all that he did were legendary. As Dr. Bryan Chapell, then president and now chancellor of the Seminary, said at the time of Ben's death from cancer in 2009, "All those who knew Ben—whether through his work, his civic leadership, or as a friend—could attest to his servant heart, generous spirit, and strong faith in Christ. He was a great friend of the Seminary whose wise counsel, invaluable advice, and consistent desire to put the interests of others before his own helped the institution to grow immeasurably."

Today, Ben's son, Benjamin F. Edwards IV, known as "Tad," continues his family's legacy in more ways than one. Following the acquisition of A. G. Edwards and Sons in 2007 by Wachovia Securities, which in turn was acquired in 2008 by Wells Fargo Advisors, Tad started his own firm, Benjamin F. Edwards and Company, where he seeks to carry on the family's tradition of excellence and integrity in business. Tad has also served on the Seminary's Advisory Board and remains a strong supporter of the school's mission both prayerfully and financially.

"My grandfather Presley had a great passion for Covenant Seminary," Tad notes. "Even though there were many other worthy organizations he could have supported, he felt that it was his responsibility to further the cause of the gospel by helping the Seminary. Covenant trains people to go all over the world to preach and teach the gospel to others who can then teach others. That multiplying effect has a profound impact for Christ's Kingdom."

For Tad, as for his father and grandfather before him, the necessity of supporting ministries like Covenant Seminary is "in the genes." "Granddad used to say that you should give all you can—and when it hurts to give, give some more, because giving should not be easy. Both he and my dad loved to help in that way. They weren't prideful about it and didn't trumpet their generosity. Neither of them felt that they were doing anything special—it was just what they were supposed to do. Seeing their hearts in this taught me to place a priority on giving and on praying through how to use my resources to bless others as I have been blessed. I'm grateful to have been shown such a Christ-centered way to live and to be a part of the legacy they started."

That legacy will now continue to have an impact on a new generation of students in very concrete ways. When Tad's mother, Joan, passed away in May 2012, a generous portion of the estate was set aside for Covenant Seminary. This gift is a wonderful testimony to the family's ongoing commitment to the preparation of future generations of church leaders and a powerful witness to the Lord's grace and provision for Covenant Seminary as he continues to work through the institution to strengthen the church and bring glory to his name.

Tad Edwards sees this as a wonderful way to honor the ideals that his father and grandfather stood for and tried to model all their lives. "We've always felt that the Seminary was of very high quality, and we've seen the Lord work to grow it into a magnificent institution. It's there for the right reasons and brings blessing to many thousands of people. We've been privileged to be a part of it all these years."

We would like to thank Mr. Benjamin F. ("Tad") Edwards IV, chairman, CEO, and president of Benjamin F. Edwards and Co., for graciously taking time to talk with us regarding his family's involvement in the history of Covenant Seminary. Additional information for this article was adapted from the book By His Grace, For His Glory: 50 Years of God's Faithfulness (St. Louis: Covenant Theological Seminary, 2006), a history of Covenant Seminary written by Dr. David B. Calhoun, professor emeritus of church history.