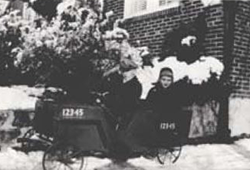 It wasn't until we were in our late thirties that my wife, Joan, and I were called by the Lord to name Jesus as our savior and to know Him as our only hope. It was at that time that we changed churches and began to hear God's Word preached as truth. As we drank in the Gospel, we developed an understanding about what giving is all about. God's gift of His only Son, Jesus Christ, was the ultimate gift—the most powerful and precious gift we would ever receive. It is the gift of eternal life.

As our love for Jesus Christ matured and deepened, we became increasingly thankful for the gift of hearing the true Word preached from the pulpit. About that time we became acquainted with Covenant Seminary through the Francis A. Schaeffer Institute, and soon a new passion sprang into our lives. We developed a heart for the work that God was doing through the Seminary.

As time went on we became more familiar with the quality and character of the professors at Covenant Seminary. We began to see the power of Scripture when it is preached as the truth of God. And we saw the rich and spiritually nourishing contact between the professors and the students. We began to see not only the need to uplift the Seminary in prayer and to encourage its professors, but we also recognized the needs of the Seminary in a physical sense—the need for additional classrooms, a library, student housing, and many other facilities to accommodate a fast-growing student enrollment.

We knew that whatever financial support we gave to Covenant Seminary would be used to promote the teaching of the truth of God's Word to thirsty students—tomorrow's pastors, counselors, and leaders. God's true Word would then be preached and taught to congregations across the nation and even around the world. And because of that teaching, God's saving grace could be understood by thousands and perhaps millions of people.

Joan and I gratefully receive a wonderful blessing every Sunday morning as we hear profound messages from God's Word preached by pastors who have been trained at Covenant Seminary—and we want others to have this same gift.

When I was about 10 years old, I remember receiving a gift at Christmas of a small castle set with model soldiers and various ancient army paraphernalia. One of the items in the set was a catapult. Centuries ago soldiers would load catapults with huge boulders. Then, with a simple tug of the trigger rope, the catapult—aimed at the enemy—flung the boulder a tremendous distance. The impact was astonishing! In the same way I think of the far-reaching, powerful effect a gift to Covenant Seminary can have today. It ensures that pastors who are well trained and firmly grounded in Scripture will preach throughout the world and testify to the tremendous, powerful effect of God's true Word. A gift to Covenant Seminary is multiplied exponentially as God spreads the truth of His Gospel.

At this Christmas season, I'm reminded of how giving to others, and in this case giving to Covenant Seminary, comes back full circle and becomes a glorious blessing to all who hear His Word preached as truth from the pulpit. And that is a beautiful gift.

JACK HUGHES
Jack Hughes, a retired advertising executive, recently started Jack Hughes & Associates, a marketing consulting firm. He and his wife, Joan, live in St. Louis, Missouri, near their three children's families and eight grandchildren. The family has been blessed in many ways by the ministries of Covenant Seminary since their introduction to it through the Francis A. Schaeffer Institute in the mid-1980s.