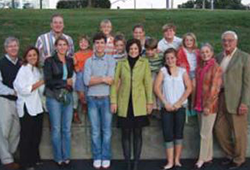 During the Great Flood of 1993, the mighty Missouri River overflowed its banks, bursting levees and sweeping away countless homes and businesses in the Chesterfield Valley west of St. Louis. Among the casualties was Cambridge Engineering, a manufacturer of industrial space-heating systems that Jack Kramer and his family had worked so hard to build up over the previous 30 years. With everything destroyed and virtually no flood insurance to help rebuild, Jack had a difficult decision to make: abandon the company and the people whose livelihoods depended on it, or go back in and start from scratch. Reminded by his son, John, of something he himself had once said during a Bible study about the patriarch Joseph—"Adversity can either make you bitter, or it can make you better"—Jack conquered his anger at the situation and decided to rebuild the company from the ground up.

With that act of faith on Jack's part, God's own faithfulness once again became powerfully evident in his life. Jack's mortgage company waived a full year of principal and interest payments. An army of volunteers, including many Covenant Seminary students, helped to clean up the muddy mess at the company's headquarters. A contractor offered to help rebuild at cost. Setting up a temporary plant elsewhere and subcontracting out work that could not be done in-house, Jack and his friends got Cambridge up and running again within a year of the flood. During that time, the company did not lose a single order, suppliers offered generous terms, and no employees left the company—even though there was no payroll to offer them at first. "God made it abundantly clear to me that he wanted me here, doing this," Jack says quietly. "I was called."

John, who took over the company after his father's retirement a few years ago, notes, "If God gives you back something that he gave and then took away, it's a blessing. It should be stewarded, shared, and built upon. God is much bigger than I ever thought, and he always comes through in ways I couldn't have imagined."

Such trust in God and reliance on his faithfulness are characteristic of the members of the Kramer family, who have been good friends and supporters of Covenant Seminary for many years. Jack has served on the Seminary's board of trustees for more than a decade; John sits on the advisory board for the Francis A. Schaeffer Institute, a post he took over from his mother, Sissy (MAT S '95), who died of pancreatic cancer in 1999. Both see their involvement with the Seminary as an outgrowth of their faith and a function of what they perceive as their calling to bless others as they have been blessed.

Jack comments, "God gives each of us different gifts, and each of them is valuable. The gift of giving is a wonderful thing—however, the Bible says we're not supposed to brag about it but to count it as a privilege. Like any gift God gives us, we're just supposed to use it for his glory. The Lord gave me the gift of giving and the tools to give, so I feel that I have a calling to do this. Seeing how God can work in your life and in the lives of others through your gifts—whatever they are—is phenomenal."

The Kramers' long and mutually fruitful association with the Seminary actually developed in a somewhat round about way, mainly through the influence of Sissy, Jack's late first wife. A teacher with Bible Study Fellowship International for more than 10 years, Sissy's love for Gods' Word and her insatiable hunger for learning more about it eventually led her to audit a variety of classes at the Seminary. She fell in love with the place and the people and developed deep and lasting friendships with many of the students and professors. John notes that his mother's classes with Jerram Barrs, which dealt with the inter-relationship between the Christian faith and the arts and culture, had an especially profound impact on her—and through her, on her entire family.

"I'm not sure how Mom first heard of [the late] Francis Schaeffer," John notes. "It was probably through her voracious reading. I know at one point she saw Schaeffer's film Whatever Happened to the Human Race?, and that really affected her. We visited L'Abri Fellowship [Schaeffer's community-driven study center ministry for people struggling with faith questions] during a family vacation in Switzerland. That was an important moment for Mom, and it started my own experience of Schaeffer and his work."

Sissy's involvement with the Seminary and the then fledgling Schaeffer Institute led to her being asked to sit on its advisory board. It was an honor she did not take lightly, and she threw herself into it with a passion that was infectious. The entire Kramer family, and even many of their friends, were blessed by the thirst for knowledge that led Sissy to develop Bible studies based on what she was learning in her classes; mentor women who needed guidance in their faith (including the woman who, after Sissy's death, eventually became Jack's second wife, Sallie); and to pass on to her children and grandchildren a love for the Lord and his Word. Other family members, inspired by her example, also took some classes at the Seminary.

Soon, Jack was asked to serve on the Seminary board. He initially felt some trepidation about this. "At my first board meeting, I saw all these men who were pillars of the Christian community, and I thought, 'What am I doing here? Why did they pick me?' I still don't really know why. It was purely a picture of God's grace."

Over the years, Seminary faculty members and students became regular visitors to the Kramer home and to a farm the family owns in Steelville, Missouri. The family's passion for the Seminary, their involvement with L'Abri and the Schaeffer Institute, and their desire to reach people who have sincere questions about the Christian faith inspired them to host annual L'Abri-style retreats at their cabin on the farm. These retreats provide a safe refuge where students, faculty members, and people seeking deeper understanding about Christianity can interact in a non-judgmental environment. The farm has also served as a place of refreshment for many pastors seeking renewal after years of ministry. Because the cabin is a family home and its use by others is limited, the Kramers have started Ebenezer Trust, a nonprofit foundation they hope will expand their ability to serve in this way by developing their vision for a full-fledged retreat center on a portion of their property they call Ebenezer Hill—echoing the biblical concept of the "ebenezer" or "stone of remembrance" (see 1 Samuel 7). Though this vision began with Sissy, it remains a passion for Jack and Sallie, who both love the Seminary and its mission. John, too, is deeply committed to this part of the family legacy. "My heart sings when I hear the stories of people who have been impacted by their time at the farm," he says. "It's a privilege for us to support that." he Kramers have been blessed by their involvement in many other aspects of the Seminary as well. Jack and John have both been regular attendees at the Men's Leadership Breakfast (MLB), an on-campus Bible study led by Seminary professors for men in the St. Louis area. Jack sees the MLB as an important vehicle for spreading the truth of the gospel and for better equipping both lay people and pastors to serve the Lord. "We face a serious problem in our culture today," Jack emphasizes. "We're inundated with the social gospel, and we face enemies from within the church itself. Covenant Seminary is one of the few holdouts for the truth of God's Word. It's important to keep sending out people who are equipped and informed to live and teach the truth, not just to say what is pleasing to the ear."

John sees similar benefit in such initiatives as the Intersect Forum, developed by the Seminary's Center for Ministry Leadership. Intersect brings together church leaders and business executives to explore contemporary leadership issues and develop mutually beneficial models for leadership. As a participant in the very first forum and an observer or presenter in subsequent ones, John found the wisdom gained during his Intersect experience especially helpful as he transitioned into the top position at Cambridge Engineering following Jack's retirement. "It validated what I was going through in my own life and helped me develop a new skill set for handling leadership issues in the company," he says. "Intersect helped me understand myself and the impact of the business in the community."

Such deep involvement in the life of the Seminary has left its mark on both men and their families. They see this as a sign of God's grace in their lives and view their support of the institution as one way of giving back some of the blessings that they have received. "I've been blown away by seeing what God has done through the students, the teaching, and the hearts that have been changed by the gospel being preached all over the world," says John. "But even if you don't take any classes here, there are so many other ways you can be equipped through Covenant Seminary. It's a privilege for me to be part of it in some small way."

Jack adds, "The Seminary is important to me because of its emphasis on right teaching and right relationships, its grace focus—which is unique in my experience—and its good models of leadership. There are many good ministries and worthy causes to support, but I can't think of any place where you can have a greater impact on the Kingdom than through investing in Covenant Seminary."