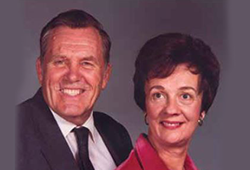 When Sybil Knox thinks of St. Louis, she recalls fondly the many 11-hour drives she made from her home in Montgomery, Alabama, with her late husband, Allen "Luckey" Knox in the 1980s and 1990s. After their pastor, Cortez Cooper, requested Luckey's help on the board of trustees of Covenant Seminary, Luckey and Sybil traveled to St. Louis several times a year so Luckey could attend board meetings on the Seminary campus. Sybil loved the trips. They would stay in one of the apartments on the top floor of Edwards Hall, attend special events hosted by the president's wife, and explore the city of St. Louis, which they came to love. Sometimes, they even brought their grandchildren with them.

In addition to the beautiful campus and warm hospitality they experienced while at Covenant, the Knoxes were also especially drawn to and inspired by the national and worldwide reach of the Seminary's mission and ministry. But that mission and ministry also had a deeply personal aspect for them as well. Through the blessing of several Covenant alumni who over the years served as pastors at their home congregation of Trinity Presbyterian Church in Montgomery, the Knoxes and their children grew in their understanding and awareness of how to live for Christ in a fallen world.

Through Luckey's eight years of service as a trustee, he and Sybil became increasingly aware of the direct correlation between the effectiveness of the ministry leaders they knew and the specifically biblical and personal training those leaders had received at Covenant Seminary. Having been a professional educator with the Alabama Department of Education, Luckey found this connection especially meaningful. "The preparation of the Lord's servants was very close to his heart," Sybil notes. "Covenant is a wonderful place to train ministers. It really impressed him more and more as the years went by."

After Luckey passed away in 2009, Sybil had a strong desire to ensure that the mission and ministry Luckey valued so much would continue to grow and flourish. She has continued to support the Seminary through regular financial gifts and faithful prayer. But she also recognizes that the Seminary's needs—and the church's need for the grace-centered gospel ministers trained here—will go on far beyond the time when the Lord finally calls her home to heaven.

Sybil realized that one of the most effective ways to ensure the future stability of the Seminary was to provide the funds for an endowment. An endowed gift to the Seminary provides both a lasting memorial to the Knoxes' work and memory and ongoing support and encouragement to new generations of pastors and other ministry leaders who go forth from Covenant to serve the church around the world.

Sybil believes that leaving an eternal legacy in addition to a material one would please Luckey very much. She says, "Our family has been so greatly blessed by pastors trained at Covenant. Luckey would want others to experience that same kind of blessing. Until the Lord returns, there will always be a need for those who minister in his name. It's a privilege to be part of helping to train his servants."