Feasting on the Word of God 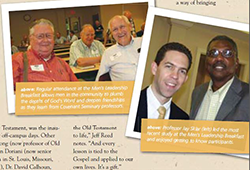 It is almost 7 o'clock on a crisp spring morning as nearly 80 men gather outside a large classroom in Covenant Theological Seminary's J. Oliver Buswell Jr. Library. Many of them greet one another with handshakes and small talk as they stop by the table in the foyer to pick up doughnuts and steaming cups of coffee before heading into the classroom to find seats. Others, arriving later than they had planned, simply rush into the classroom and sit down.

As the men get settled, Dr. Jay Sklar, associate professor of Old Testament at Covenant Seminary, walks toward the front of the classroom. "Shalom, men!" he says cheerfully as he greets the crowd with a smile and the traditional Hebrew word for peace, harmony, and wholeness. Voices chime in with the similarly cheery response of "Shalom, Jay!"

"It's good to see you all again," says Sklar. "If you're all ready, let's begin. Please turn in your Bibles with me to the book of Judges. . . ." Thus begins another meeting of the Men's Leadership Breakfast—affectionately known as "MLB" among participants—a popular time of fellowship, Bible study, and spiritual growth that has become something of an institution at the Seminary since its inception more than a decade ago. (Even longtime attendees do not know for sure how many years it has been going on—estimates range from 12 to 16 years, give or take a few.)

Dr. Sklar teaches today, but he is simply the latest in a long line of Covenant Seminary professors who have led the group over the years. Dr. Hans Bayer, now professor of New Testament, was the inaugural teacher back in the group's early off-campus days. Other leaders have included Dr. V. Philips Long (now professor of Old Testament at Regent College), Dr. Dan Doriani (now senior pastor of Central Presbyterian Church in St. Louis, Missouri, and adjunct professor at the Seminary), Dr. David Calhoun, professor of church history at Covenant Seminary since 1978, Dr. Bryan Chapell (president of Covenant Seminary), and many more. Topics covered over the years have included, among others, the books of Job, Hebrews, and James, as well as a study of the Sermon on the Mount.

For most MLB attendees, the opportunity to sit under this kind of teaching is one of the biggest attractions of the gathering. Bill Gladney, for instance, who has been coming to the MLB regularly for two years but attended off and on for several years before that, says, "This is a wonderful opportunity for a layman to hear some of the best professors in the country. Dr. Doriani was great, and Dr. Sklar opens the Word in a way you rarely see. This is as close to being able to go to seminary that a guy like me can get."

Jeff Reed, who has been attending the MLB since it began, agrees. "The teaching we receive here is unbelievably excellent. We get fed every time we come—and I don't mean the food!" Indeed, he notes, the free continental breakfast provided at each meeting is really more of an afterthought for most participants.

Today Dr. Sklar leads the group through a study of Judges 10:6–12:7. "Jay has a way of bringing the Old Testament to life," Jeff Reed notes. "And every lesson is tied to the Gospel and applied to our own lives. It's a gift."

Jack Reed, Jeff's father and the man who was primarily responsible for starting the MLB all those years ago, smiles and nods in affirmation. "Where can you get better teaching than this?" Jack asks.

Jack—a retired investment banker, a ruling elder in the PCA, and a longtime member of the Seminary's Board of Trustees and Advisory Board—recalls how the MLB came about. "It was back when I had been on the Board for only two or three years," he remembers. "I was having lunch with Ben Homan, who was the Seminary's development officer at the time, and we were talking about ways to make the Seminary more known in the area and offer the community the wealth of resources we have here. At the time, we didn't have a regular men's Bible study at my church, and I thought, 'Well, what if the Seminary sponsored something like that that would spotlight some of the professors' teaching?' We talked about it with Paul Kooistra—the president of the Seminary at that time—and he liked the idea."

Reed has been impressed not only by the quality of the teaching presented at the MLB, but also by the ways in which he has seen the Lord work through the MLB over the years. He knows of a few men who have come to Christ at least partly through the ministry of the MLB, and he knows of other participants who have become major contributors to the Seminary because of their involvement with the group. In addition, he feels greatly blessed by his own connection with the MLB and Covenant Seminary.

"The Seminary has been one of the most meaningful associations in my life," he says with emotion. "I've seen time and time again how living obediently to the Lord brings godly results. The Seminary tries to be obedient and do what is right in the eyes of God. It almost makes me teary-eyed to think of it." Jack humbly brushes aside any attempt to congratulate him on the success of the group that he was instrumental in bringing into existence. "It's all the Lord's doing," he says softly. "Has He used me and others in this endeavor? Maybe—but it's all Him."

Jay Sklar acknowledges the Lord's hand in the MLB as well. He is especially pleased to see how God has grown the group over the years and how the participants represent a crosssection of men from the community. "We have current and retired businessmen," Sklar notes, "and we have tradesmen and workers. We have pastors from several denominations, including some who come from St. Louis city center. We have men who come from a variety of backgrounds and levels of faith and understanding. Not everyone who comes is necessarily a believer, so we try to avoid Christian jargon and make the lessons accessible even to those who have little or no background in the Bible."

Sklar's goal in teaching the group is, he says, "not much different from what I might do on a Sunday morning in church. I try to explain the text clearly and identify the message that the Lord has for us today."

"Believe it or not attendance actually grew when we were going through Leviticus," Sklar says with a laugh. "That always makes me smile. Leviticus is not a book with which you'd expect that to happen. But, as I tell my students, every book of the Bible is meant to help us understand the wonder of God's Kingdom and our part in it. Rightly understood, Leviticus can move one to tears of joy as much as Romans, while Genesis can propel us forward into missions as much as the Great Commission itself. I enjoy helping people see how the Old Testament is relevant to today, how understanding God's intentions for His covenant people and understanding His character prepares us for understanding who Jesus is and what He has done for us. When I see somebody really 'getting it,' that's exciting to me."

Known as much for his wry sense of humor as for his biblical expertise, Sklar occasionally surprises the group by showing up to teach a session "in character." One Christmas he appeared dressed as a shepherd and told the story of Christ's birth from that perspective. This past Easter he came as Cleopas, one of the two disciples who met the risen Jesus on the road to Emmaus.

This particular meeting was the second to last in the most recent MLB series. The group eagerly anticipates getting back together in the fall and diving into another series of meaty and spiritually fulfilling topics.

For Sklar and Jack Reed—and for all those who join them every other Tuesday morning to feast on the Word of God—the most important thing is that souls would be touched by the message of God's grace and that His name would be glorified by lives transformed through the Gospel.